Written by: Samantha B.

The 1970s are remembered as a time of civil unrest and radical free-spiritedness. It’s noted in history as a decade of pivotal change, as idealistic attitudes held in the 1960s slowly faded away. The country endured some of its most challenging times – and one escape from the anxiety was music. Music from the 70s changed drastically from the beginning of the decade to the end, with mainstream culture-changing constantly in between. Some artists used music to make political statements, and others to bring joy and peace during a time of stress. Great music from this era may have been forgotten in time, but they still hold their own as era-defining classics.

Popular songs in the early ‘70s carried traces of musical trends and styles from the 1960s. In the mid-60s, American music was largely impacted by the ‘British Invasion’ – a cultural phenomenon when British musicians and bands became radically popular in the U.S. This shifted the sound of American music for the rest of that decade and the next. It eventually pushed out some of the most prominent genres of the 60s, inciting a period of change. UK influences are easy to find in mainstream music from the start of the 70s, especially in Pop and Rock songs.

The Beatles: “Let It Be” Genre: Soft Rock
The Beatles are credited with leading the British Invasion after captivating the U.S. music scene in the 60s. With songs like “Let It Be,” they kept their hold on mainstream music going into the 70s and beyond. 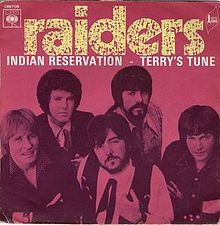 Genre: Rock
At the start of the ‘70s, Paul Revere & the Raiders became just ‘The Raiders’ and fully embraced the UK-inspired garage rock genre. “Indian Reservation” is one of many songs that highlights their versatility and sound rebrand. Genre: Soul, R&B
Unlike other genres, Motown was unphased by the British Invasion and had grown incredibly popular by the time the 70s rolled around. At just 20 years old, Stevie Wonder earned his 5th charting hit with “Never Had A Dream Come True.” Genre: Soft Rock
Carole King’s moody melodies stray far from the harsher sounds of rock, but both were seen as a means to express political views. Music lovers saw “It’s Too Late” as an anthem of anxiety surrounding the country’s departure from the idealistic 1960s. Genre: Glamour Rock
In 1972, Elton John revived the British rock sound and added the eccentric, vibrant flair that he would later become iconic for. Undoubtedly one of his most loved songs, “Crocodile Rock” remains a catchy and uplifting tune.

By the mid-1970s, the global music scene saw the massive rise of disco. It would go on to become the biggest genre of the decade and inspire similar synthesized sounds, including electrified funk and new wave pop. Its popularity picked up in the mid-1970s when disco acts like Gloria Gaynor and the Bee Gees were dominating the music charts. By this time, the economic prosperity of the 60s had waned and people were struggling to cope with political unrest caused by the Vietnam War and the reverberations of the Civil Rights Movement. Disco music and disco dancing were an escape from the negative social and economic issues that concerned the nation. Genre: Disco
You may have heard of Gloria Gaynor from her 1978 hit song “I Will Survive,” but she was early in the disco game with galloping, fun tracks like “Honey Bee.” Genre: Funk
Earth, Wind & Fire has experimented with several genres, but their funk phase may have been their best. “Shining Star” is just one standout in their endlessly long list of feel-good tracks.

Barry White: “You’re the First, the Last, My Everything” Genre: R&B, Disco
The soul & disco fusion sound became a signature of Barry White, who fully embraced the impact of disco as the decade neared its end. Genre: Funk
“Fame” was one of David Bowie’s first attempts at what he called ‘funk rock,’ and he hit the nail on the head. Fun fact: John Lennon co-wrote this song and can be heard in the background vocals.

Bee Gees: “How Deep Is Your Love” Genre: Soft Rock
By 1977, the Bee Gees were known for their upbeat disco hits, but they switched it up with this romantic ballad.

In the concluding years of the 70s, music moved away from uplifting disco and towards rock n’ roll. Garage rock at the start of the decade influenced a rise in popularity for punk rock, which would become a staple sound of the late 70s era. Artists like The Ramones, Patti Smith, and KISS were some of the first American punk rock acts to make it big around the world and bring notoriety to the genre. Along with punk music came punk fashion – black leather, heavy boots, and exaggerated face makeup. The gritty sounds and outlandish look expressed rebellious attitudes and skepticism towards mainstream culture. Genre: Punk Rock
The Runaways were an all-female rock band with famous punk artist Joan Jett as lead guitarist. “Cherry Bomb,” released in 1976, has since become the band’s signature song.

The Sex Pistols: “God Save the Queen” 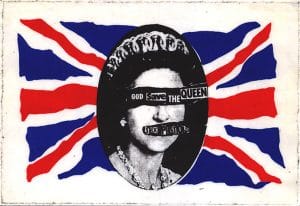 Genre: Punk Rock
Considered very controversial at the time, “God Save the Queen” was a direct statement on the British monarch. The Sex Pistols, being from the UK, said they wanted to evoke sympathy for the English working class. Genre: Rock, New Wave
A love song in disguise, “Call Me” is a catchy track that launched the punk rock sound to the top of the charts. Fun fact: this song was originally supposed to be sung by Stevie Nicks. Genre: Rock
KISS is remembered mostly for their absurd costumes –– black and white face makeup, heavy metallic clothing, and 6-inch platform boots. But behind their theatricality was a knack for making lasting tracks like “Calling Dr. Love.” Genre: Punk Rock
“White Rock” is short and intense, a staple feature of late 70s punk music. The controversial song deals with class economics and race, which many people thought was advocating a race war.

As shown by the songs listed above, the 1970s was a rich decade for music. There was rarely a lull in the wave of new music as mainstream sound continued to change in style and genre. With such a wide range of music, many great songs have been forgotten and lost in time. Nonetheless, there are thousands of songs from the 70s that define the era and are still enjoyed to this day.